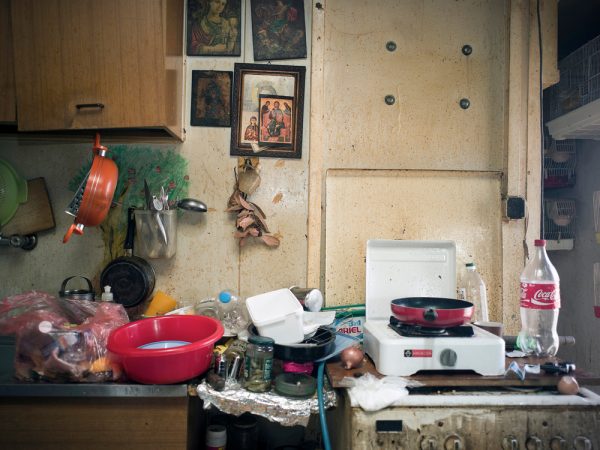 Since 2009 a sizeable part of the Greek population has been facing the consequences of a severe capitalist-financial crisis. Following a three party agreement between the Greek government, the EU and the IMF, successive austerity packages have dismantled the country’s social fabric. An estimated 23% of Greeks are presently living below the poverty line. Youth unemployment (15-24 years) has reached 62%, while 1.5 million people are currently unemployed. As the recession keeps deepening the circumstances experienced by Greek society are comparable to those of the Second World War. In Menidi, one of the poorest and most rundown suburbs in Athens, is pinned on the map as enclosing the human geography of the Greek crisis era. The Kapota camp was inaugurated in 1999 as a required aftermath of the devastating September 1999 earthquake and was ceded by the Greek armed forces. Initially 400 prefabricated homes were set up within the Kapota camp, but another 550 were added soon after. The Greek state’s original plan was for the earthquake victims to stay there for two years after which they were to be transferred back to their repaired homes. Almost 16 years later, more than 3,500 people continue to live in the camp’s modified containers hence constituting a society with all the characteristics of a ghetto: poverty, social exclusion, isolation, long-term unemployment. People here encounter dozens of problems of psychological, health and economic hardship. Many, mainly repatriates from the former Soviet republics, have been through situations they were unable to manage, issues that torment them further over time.

Following the offensive of the jihadist Islamic State organization and the siege of Iraq’s second largest city, Mosul, on the 10th of June 2014, as well as the declaration of the Caliphate ruled by an rigorist and extremist vision of Islamic law – by Abu Baker Al Baghadadi, the self-declared Caliph – across Syria and Iraq, Kurdish fighters from Iraq, Syria and Turkey have risen against them. In seized territory all over Iraq and Syria, brutally dominated by the Jihadists, like Sinjar in the Iraqi Ninivah province for example, ISIS captured, mass killed, and enslaved minorities like Yezidis, Kurds, Christians or Shia muslims. Since then, Kurdish fighters from the Turkish outlawed Kurdistan Workers’ Party (PKK), and Peshmergas (the ones who face the death) in Iraq, have become the main force that is actually fighting the jihadists in northern Syria and northern Iraq, gaining consistent battles and territories, making the Jihadist self declared Caliphate weaker by the day. The Kurdish people inhabiting the Kurdistan regions in Turkey, Iraq, Syria, as well as Iran, nestled between Empires, surrounded by conquerors, have shared the wish for one hundred years, and for the first time today,they are able to dream of an Independent State. The pictures of this on-going documentary project have been taken between Iraq, Syria, and Turkey, since August 2014.

“Displacement” is a project that combines narrative and photography, with Giovanni Cocco andCaterina Serra offering a dialogue between two different ways of seeing that do not want to be overly explicative of each other. So, what is left of a city that has lost its inhabitants? Where does the physical city ends, and the living one begins? What happens to its genius loci when its citizens are lost, and displaced to the anonymity of suburbia? The project took shape while we worked on a city that in Italy is a symbol for the loss and dispersion of a community: L’Aquila. The earthquake of the 6th of April 2009 converted the historical town into a building site, in an undistinguished non-lieu of new buildings that resurfaced from the dusty debris under the guise of refurbished hotels, coffe shops and wine bars, as if these were the only suitable places for social life. The population meanwhile has been shifted and exiled into the New Towns, dormitory suburbs with centers that are nothing but the roundabouts of shopping malls, where one can feel a material and spiritual disorientation. Over the course of 2014 and 2015 we immersed ourselves in this city to capture and document the loss and to follow the population displacement towards the edges of the urban map. A cartography of change, intimately personal and powerfully communicative. The old city, amidst rubble and neglect, and the new town, dislocated and decentered, emerge as the representation of a two-faced country, torn in its inability to value its inner strength, skills and beauty.