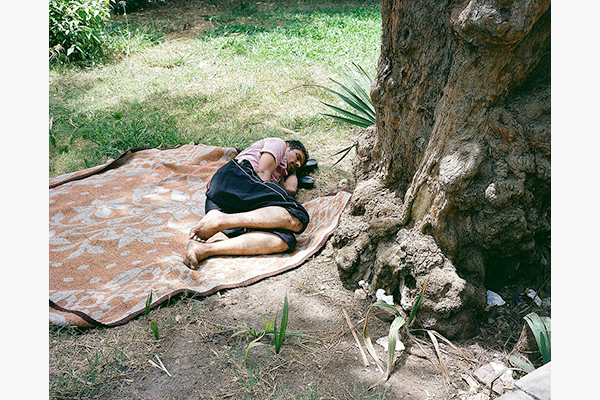 Refuge Dreamgrove is a body of work based on the notion of hospitality.
Around 2009 I noticed in my images the recurrence of men sleeping in public places, on subways, trains, boats… It made me think of a line that I used to hear in  my childhood: “Your home will be where you put your head to sleep, for a pillow you’ll have a dreamgrove”.
These words were said by a prostitute, who took in a scared twelve year old child. He was one out of the thousands of Greek survivors of what  came to be known as the “Asia Minor Catastrophe”. He walked barefoot for days from Smyrna (in Turkey) in order to reach Lebanon. He lost all of his family on the road and sought and found refuge in a brothel for four nights, in the port area of Beirut. This phrase and that city were his haven for the rest of his life. Though I never met him in person, that child was my grandfather.
I structured these photographs, partially inspired by my grandfather’s migration and refuge, around travels through the cities and mainly countries that border the Mediterranean, travels that, for many reasons, including escape from Lebanon’s Civil War, have constituted much of my life. I always travel to meet people, never to visit a place.
Men asleep in public places, internal spaces where I was welcomed, and views from a welcomer’s window, balcony or terrace, these are the three elements of the work. The juxtaposition of these three elements make up the journey. The pictures bring out a heavy tiredness that goes with the wandering, but also a dream. While they are out in the open, in public, each of the wanderers is locked into a very personal and silent world, a kind of grove. As they seek refuge, look for safety, lie down and rest, they are passed over and ignored. And then they move on, and on, in an endless migration, or in an odyssey towards something that they could call home…