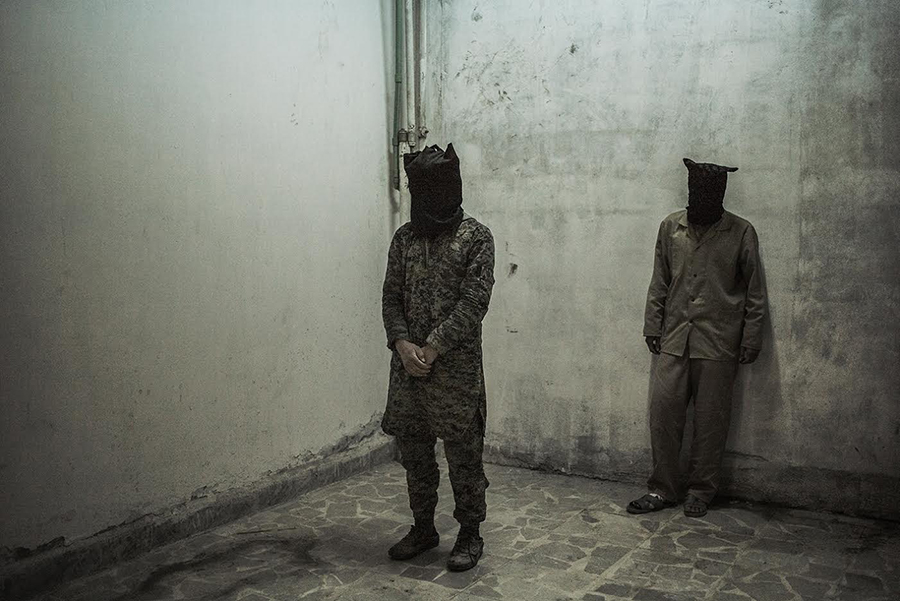 Wrapped up in a uniform, frozen in martial poses, armed or impuissant, fighting or imprisoned, always a sacrificial offering, the body in war doesn’t belong anymore to its inhabitant but to the war itself. The young Kurdish recruit, enclosed in his attribute as a member of the militia, has nothing to own anymore, other than a weary face. A body thrown into the vanguard, in front of an invisible but ever present enemy has surrendered to the potential of a shot coming from the opposite side. Behind the wall that protects him, some hundreds of metres of mud separate the abandoned house, where he is, from the enemy line. In the brief clash, from the battles that succeed these long moments of waiting or ennui striving with anguish, the lines break and the fighting bodies collide. Captured, removed from the battleground, those imprisoned are thrown into a deep cellar, away from the world of the living. The young jihadist, aged 17, has already lost his face, which is stuck in a sack. The uniform, a relic of a lost power covers a deprived body, restrained from the prison walls and the guards’ violence. On his back, the double wounds are announcing his forthcoming destruction.

They wait for the enemy. Before they start with the war they are rehearsing it, masked faces, vests tactically fit over their civilian clothes. In the abandoned streets, marked by previous combat, they reproduce the gestures and poses of the battles to come, guns pointing towards a perspective in void. Adolescents in partisan districts immerge in the images of televised wars, ancient revolutions, conflicts which went the other way, for which they’ve been hearing testimonies throughout their little lives.  Only the next martyr will bring their faces back. Vanished into their common hood, they won’t appear again but only through the offered death, images of glory posted on the city walls after the battle. The living have already abandoned it, leaving only blind windows behind. The movement of martyrs which rises, blossoms in streets where the war is installed imposing its geographical position over a lost reality. However, behind the barricades, on the destroyed cobbled roads and the forbidden streets, fresh drinks are still sold while expecting the disaster.