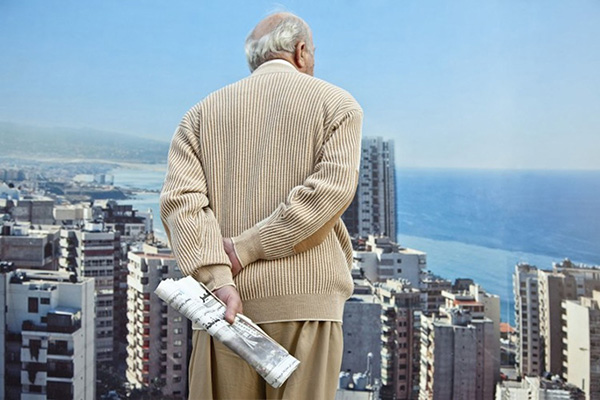 Since the end of the Lebanese civil war in 1990, Beirut has been striving, to regain its glamour and splendor through the efforts of reconstruction, in the aim of reconstituting the old myth of a city commonly referred to as the Paris or Switzerland of the Middle East. This photography project is a portrait of Beirut’s urban future. It aims to raise questions about the devenir, or the becoming, of Beirut and its associated representations, characteristics and how they culminate to become the future essence of the city.
Beirut is currently undergoing a construction boom on the back of large inflows of foreign capital and the historical profitability of the real estate sector. To advertise construction projects, developers display large billboards in situ reproducing the proposed reality to come. These displays exemplify computerized “biopolitic” renderings that simulate the building, its interior, surroundings, illusory residents and their lifestyle.
The photography project intends to capture billboard images that represent virtual buildings framed within their real environment. This dichotomy and juxtaposition give the photographs a sense of “oddness” that reflects the current transformation of the city. The latter is demonstrated by the use of scale, layering and image framing as tools to underline readings of the city.
Beir-utopia is, in essence, the title of a counter-utopian situation, one that does not differentiate between illusory images and the pastiche narrative they embody. This confrontation allows for spaces to be redefined and their potential encouraged as new forms of identification arise and are re-appropriated within the wider social and architectural fabric of the city. The photographs become spaces of resistance.